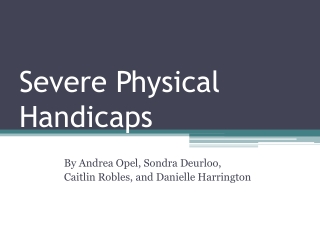 Including Students with Special Needs in General Physical Education - . march 2011. first and foremost - the lingo.

Continued severe deprivation - . for upwards of one billion people their lives are characterized by a combination of

Severe Weather-OT Comparisons - . how often is severe weather reported near any ot detection?. results are not truly