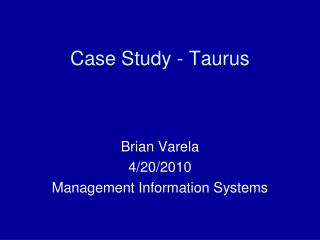 Case Study - Taurus. Brian Varela 4/20/2010 Management Information Systems. What was Taurus?. Taurus was a project with the goal of: Developing an automated transaction settlement system for the London Stock exchange Successfully accomplish de-materialization of all transactions.