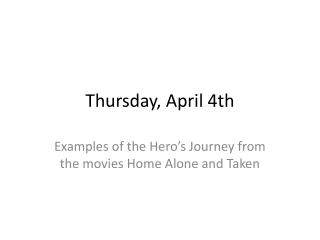 Thursday, April 4th. Examples of the Hero’s Journey from the movies Home Alone and Taken. Home Alone. 1) Ordinary World: 8 year old Kevin lives in Illinois w/ well-to-do parents. He’s the youngest, spoiled, and clueless about everything. He says he doesn’t like his family. Bell Ringer: Thursday, April 4th - . copy down the vocab for today… importunity (n): 1. a request that is persistent,

Thursday, April 12 - . turn in your cards. put them on my desk. 2. update your table of contents if you did not on

Thursday April 10 - . warm up questions. what two political parties go to war in china? why does the civil war pause in

Thursday, April 24th - . what do you personally believe about an “afterlife”?. here is the plan…. students will be

Thursday, April 25, 2013 - . please get out the worksheet on sentence mistakes and finish working on the sentences we

THURSDAY, APRIL 3, 2014 - . warm-up: copy the following sentence in your journal, then add parentheses and/or brackets:

Thursday, April 3, 2014 - . swbat graph rational functions. do now. you should be silently starting your do now log onto: