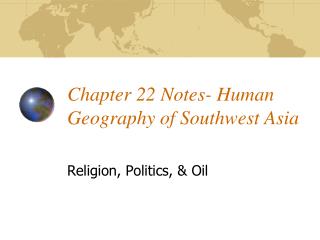 The 5 Pillars - . by: meghan mccumbers. shahadah. the first pillar of faith is shahadah, the profession (declarations) of

Human Geography of Southwest Asia: Religion, Politics, and Oil - The rise of major religions thousands of years ago and