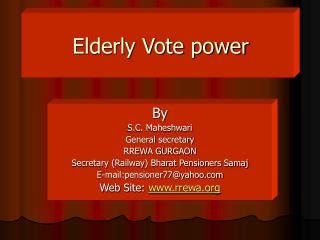 The Hospitalized Elderly Patient - . u. ohuabunwa md. learning objectives. understand the hazards of hospitalization in

What is the leading cause of the acute surgical abdomen in the elderly population? - . appendicitis biliary tract disease

The elderly - . aging. aging - the process by which human behavior alters with time wisdom and judgment become more acute

The Duty (or Not) to Report: Options in Elder Abuse Response - . judith wahl advocacy centre for the elderly

The Duty (or Not) to Report: Options in Elder Abuse Response - . judith wahl advocacy centre for the elderly

DIAGNOSIS AND MANAGEMENT OF XEROSTOMIA IN THE ELDERLY PATIENT - . salivary gland dysfunction and xerostomia (dry mouth).

aging and the elderly - Sociology, eleventh edition. graying of united states. seniors now 12.4 percent of the