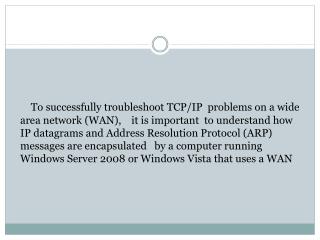 To successfully troubleshoot TCP/IP problems on a wide area network (WAN), it is important to understand how IP datagrams and Address Resolution Protocol (ARP) messages are encapsulated by a computer running Windows Server 2008 or Windows Vista that uses a WAN.

Strand 3.3 of IT Systems - Networks. strand 3.3 of it systems. what is a network?. a network is a collection of computers

Wireless Networks - . cellular and land line telephone systems are responsible for providing coverage throughout a Project Report On ISDN Under the Guidance of Mr. Sachin Khandelwal(S.D.E.) Submitted by: - Arpit biyani(group leader)