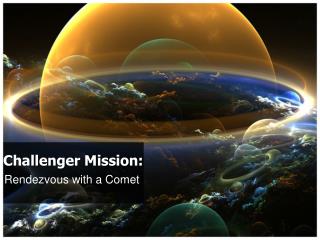 Challenger Mission:. Rendezvous with a Comet. Rendezvous. To meet up in a location. A probe entering a comet. Courtesy: Pat Rawlings - Deep Impact -NASA & JPL. Simulation. Acting out an activity (space mission). Our Solar System. Earth is a part of The Solar System. Space Technology - . a look at the technology that has allowed humans to enter space. generic space technology .