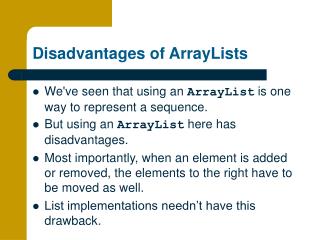 ArrayLists - . arrays in java. java has built in arrays as well as more complicated classes to automate many array

Java ArrayLists - Why not just use arrays?. java arraylists. … if only an array could …. shrink when you remove

Arrays And ArrayLists - . &quot;should array indices start at 0 or 1? my compromise of 0.5 was rejected without, i

Array, ArrayLists, and Interfaces - Review of arrays. an array is a contiguous area of memory that holds multiple items

DISADVANTAGES OF INTERNET - . by : nurul azwa binti kamarulzaman. spend too much time on it. what will happen?. easily

Chapter 11—Arrays and ArrayLists - Java. the art and science of. an introduction. to computer science. eric s.

DISADVANTAGES - . by rich edwards baylor university. building the disadvantage. link: why will the plan cause this?