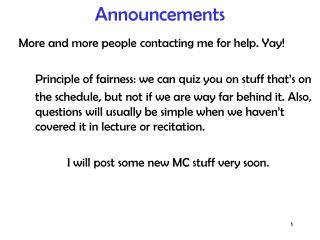 Announcements. More and more people contacting me for help. Yay! Principle of fairness: we can quiz you on stuff that’s on the schedule, but not if we are way far behind it. Also, questions will usually be simple when we haven’t covered it in lecture or recitation.