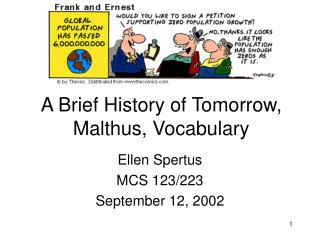 A. P. U. S. History - . skills emphasis. one of the keys to success in apush is having a strong vocabulary. suggestion:

THOMAS MALTHUS - . malthusian and neo-malthusian theories. who is thomas malthus and what did he predict?. what factors

Malthus - . you have two kinds of people: farmers and laborers. every round, you make the following moves: farm: roll one today=history tomorrow=gone future=now - . the secret known by all:. “the rich rule over the poor, and the borrower is

Ricardo and Malthus - . david ricardo and thomas malthus are prominent names in the classical economics, which in