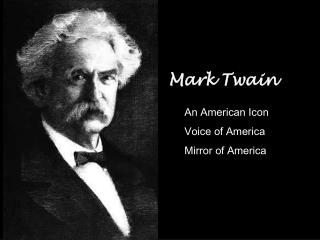 Mark Twain. An American Icon Voice of America Mirror of America. Twain: Icon and Iconoclast. The icon who broke the icon The voice of both praise and criticism The mirror reflects both the beauty and the ugly A money seeker in contempt of money a true man. Why American Mirror?. The Prince and the Pauper By Mark Twain Dramatized by Joellen Bland - . mark twain (1835-1910)wrote much about his

Lesson 9 - . mark twain --- mirror of america. objectives of teaching:. to comprehend the whole text to learn and master

Lesson 9 - . mark twain --- mirror of america. objectives of teaching:. to comprehend the whole text to lean and master

The Adventures of Huckleberry Finn - . mark twain. stereotype vs.

The Victorians - . “british history is two thousand years old, and yet in a good many ways the world has moved farther