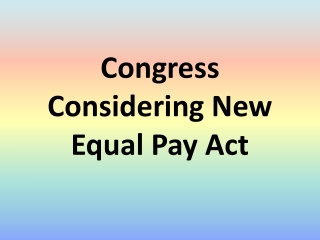 Nearly fifty years after it passed the Federal Equal Pay Act of 1963, which required equal pay for men and women doing equal jobs in the workplace, Congress is looking into additional legislation to further close what many believe is a pay gap between men and women. http://prestonbrar.com/congress-considering-new-equal-pay-act/ Equal Pay Audits - . 19 november 2014. whereas universal and lasting peace can be established only if it is based upon

Equal Pay Day - . workshop - bpw awareness campaign 5th march, csw 54, new york. this is the follow-up of the side event

LAW of Equal Pay - . by marcos vargas . when was the law made?. the equal pay act was passed in 1963 and signed by john

Equal Credit Opportunity Act - . scope. applies to both consumer and non-consumer credit prohibits discrimination on a