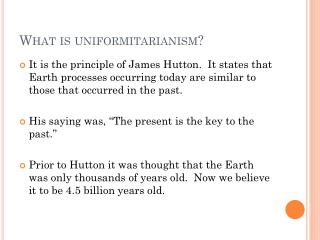 What is uniformitarianism? - PowerPoint PPT Presentation What is uniformitarianism?. It is the principle of James Hutton. It states that Earth processes occurring today are similar to those that occurred in the past. His saying was, “The present is the key to the past.”

Theory of Continental Drift - . the present is the key to the past. james hutton 1785 uniformitarianism. known as the

Class 2: Chapter 1 - . ideas needed to understand the point of the class. earth systems. helps organize a set of

Evolution Theory History and Problems, Examples of Bias and Fraud in the Theory - . historical science 01159.

What is the science of geology? - These workers are drilling a hole that will be more than two kilometers deep. later

Chapter 19: Time and Geology - . what is uniformitarianism?. how can the sequence of past geological events be

Catastrophism - . uniformitarianism. the assumption that the natural processes operating in the past are the same as

Earth’s Story and Those Who First Listened - . chapter 6 section 1. paleontology- the study of past life using fossils.

Paleontology Test Review - . what is a paleontologist?. a person who studies past life (fossils). how do scientists date

Paleontology Study Guide Answers - . please take a sheet of paper and label it “extra info” . #1 how do scientists