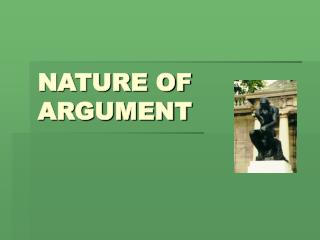 NATURE OF ARGUMENT. What is argument?. Monty Python sketch: “I’d like to have an argument”. definition.

Writing in Science Engaging in Explanation and Argument from Evidence - . maryland college and career readiness

Unit One Fighting with the Force of Nature - . i. lead-in questions. 1. man and nature, which do you think is more

Einstein’s Miraculous Argument of 1905 - . john d. norton department of history and philosophy of science center for

Disciplinary Literacy: Argument in History and Social Studies 9-12 - . agenda:. study the research and expectations of

Philosophy of Religion Lecture 1: Intro &amp; The Argument from Design - . dan weijers phil104-2011. what we’re not

ARGUMENT Definition - . is not always a shouting match, as many people think but is based on reason and logic is an

Toulmin Analysis and Rogerian Argument - . the toulmin model of argumentation. who is stephen toulmin?. toulmin was a