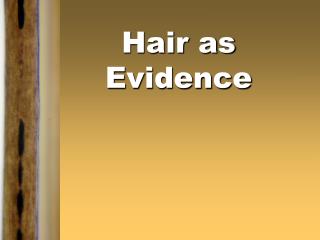 Hair as Evidence. Introduction. Human hair is one of the most frequently found pieces of evidence at the scene of a violent crime. It can provide a link between the criminal and the crime. From hair one can determine: If the source is human or animal Race (sometimes)

Hair Transplant in Indore - Not all of us are blessed with thick growth of hair. while all human beings do experience

Hair Treatment - Many women and men who have had the hair treatment done are amazed at the results: sleek, smooth and

Hair Loss 2009 - . tom paige, md department of dermatology ccrmc. patient is losing her hair and is very distraught over

Q. What are the two ADD: chief purposes of hair? - . protection adornment. add to the side bar: hair is an appendage of

Hair - . unit 4. i. the study of hair. hair is considered to be class evidence. without follicle cells, it cannot be used

Anatomy of Hair - . this is a cross section of a hair showing all three layers. image of a hair follicle . each follicle

Lecture: Forensic Evidence Physical Evidence Any material either in gross or trace quantities that can establish