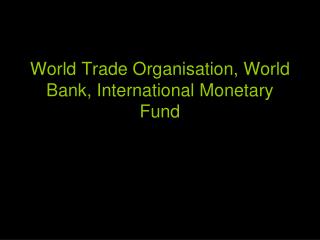 International Monetary Fund - “i have full confidence in the imf. it is a very strong international institution”.

Gérald Ollivier World Bank May 2003 - . trade and transport facilitation: from diagnostic to implementation our cis7+2

IMF International Monetary Fund Liam Gracielle Chato - . imf logo.wikimedia.photo . 25 nov 2010. when and where was it

Creation of a trade repository in Russia in light of global trends on the world derivatives market - . moscow 2011. new

IMF WORLD BANK WORLD TRADE ORGANIZATION - . who? what? when? where? why?. at the end of this lecture you’ll. ... have a

International Institutions - . institutions = rules and organizations that govern and constrain behavior types of

International business environment - . what is business..??. a  business  is a legally recognized organization