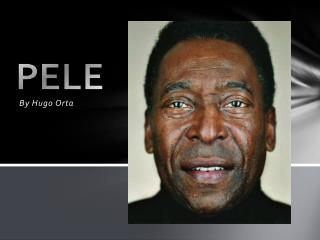 PELE. By Hugo Orta. C hildhood. Edison Arantes do Nascimiento, who we know as Pele, was born on October 23, 1940 in Três Corações, Brazil Pelé grew up in poverty in Bauru, São Paulo. H e developed a talent for soccer by kicking a rolled-up sock stuffed with rags around the streets of Bauru. Pele - . “o rey” the king of football. background. he is considered by many people as the greatest football player of

Pele - . the soccer king. by: jordan roeder. pele’s life. born in brazil he was the first soccer player to score 1,263