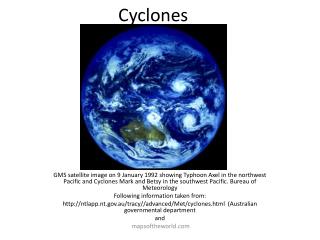 Cyclones. GMS satellite image on 9 January 1992 showing Typhoon Axel in the northwest Pacific and Cyclones Mark and Betsy in the southwest Pacific. Bureau of Meteorology Following information taken from: CYCLONES - . bianca ricci, sol echandi and agustina fernandez 9ºa- 2013. what is a cyclone?. a cyclone is a system of

Cyclones - . what are cyclones?. cyclones are giant, spinning whirlwind storms. in order for a cyclone to be identified

Cyclones - . objective: to complete our case study of this natural hazard in terms of the 7 key components. . storm

Scary Cyclones! - . by jessica farfan. what is a cyclone?. cyclones are huge revolving storms caused by winds blowing a

Green Cyclones - . excerpts from thoreau’s walden. from “where i lived and what i lived for” summary. thoreau went

Tropical Cyclones - . mostly work within the national oceanic and atmospheric administration in the u.s.a., especially

Tropical Cyclones - . are we at risk?.

Tropical Cyclones - . quiz!. question 1. what temperature does the ocean need to be before a tropical cyclone can form ?

Middle Latitude Cyclones - . by jenny barnes. an introduction:. mid-latitude cyclones are also known as extra-tropical or