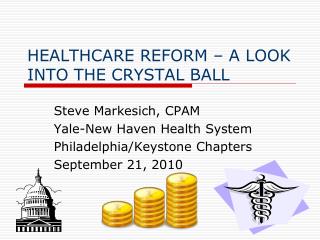 HEALTHCARE REFORM – A LOOK INTO THE CRYSTAL BALL HEALTHCARE REFORM – A LOOK INTO THE CRYSTAL BALL

Looking Into the Crystal Ball CCS- Where are we in 2020? - . nils a. røkke, sintef british-norwegian ccs workshop april

A Primer on Healthcare Reform: Key Concepts and Getting Ready â€“ Next Steps - . presented to the system leadership

The Nightmares of Transition and Things to Think About - . debbie wilkes, m.ed. vickie mitchell, ed.d. the crystal ball.

Healthcare Reform The “Affordable Care Act” - . how will it affect substance abuse care?. population prevalence. in

Where is Genealogy Software Headed? - . october 20, 2007. why use genealogy software?. to organize our research efforts!

Looking into the future of water and agriculture in a changing climate (without a crystal ball) - . ana iglesias