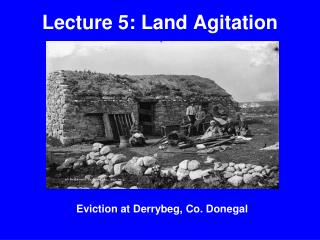 Lecture 5: Land Agitation. Eviction at Derrybeg, Co. Donegal. 1. Tenant demands in post-famine Ireland and the Land Act of 1870. 2. Causes of the Land War. 3. The New Departure. 4. The Land War. 5. Tactics employed during the Land War. 6. The Plan of Campaign.

Beulah Land - . i'm kind of homesick for a country to which i've never been before; no sad goodbyes will there be spoken,

The Boxer Rebellion - . on which group did the boxers focus their attention?. aim : how did the chinese attempt to end

Lecture 6: Home Rule - . home rule. the objective of irish constitutional nationalists for over four decades the term was

Chapter 9 - . testing and inspection of welds. objectives. contrast six differences between mechanical or destructive and

Richmond's Weathering - . a gis lesson. w hat is weathering?. the process of rocks or other substances breaking down at

Chapter 4: Insolation and Temperature - . the impact of temperature on the landscape. all living things influenced by

Final Exam Preparation - Presented by: eric b. miller academic advisor. final exam preparation. do you feel like this