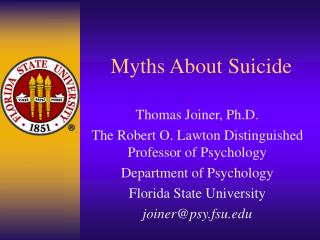 Facts and myths about suicide - . there is a lot of inaccurate information around about suicide. this website aims to

MYTHS ABOUT - . the bible. myth #1. the bible’s text has been corrupted over time. old testament. oldest manuscripts.

Myths About College - . center for outreach in science and engineering for youth (cosey) camps, 2011. true or false: the

Myths About Rape - . women are raped by strangers. in approximately half of all reported rapes, the survivor has some

Myths About Deafness - . myth. all deaf people can read lips.

Myths about Parenting - . what are some myths that might exist about parenting? (examples?) how are the myths different

Myths About Poker - With the advancing technology, poker games are becoming more and more popular among the youth. still,

Myths about Travelling - These are some myths about

Questions about Suicide Assessment - . how should clinicians use knowledge of suicide risk factors in their assessment of