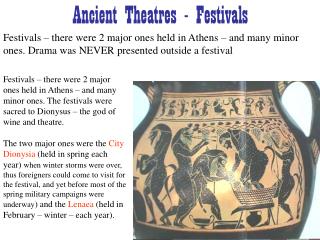 The FIRST Theatres Ancient Greece - . almost every greek city had a theatre because plays were part of many religious

The FIRST Theatres Ancient Greece - . almost every greek city had a theatre because plays were part of many religious

Theatres - 7. explain, with examples, how films are promoted. in addition, explain which methods you think are the most

Theatres - . i’m a great theatre-goer = i’m fond of thetres i go occasionaly = i go sometimes i go when smth worthy

Elizabethan Theatres - . theatres did not have scenery curtains special lighting women actors theatres were built around

Types of Theatres - . various and unique places to perform. there are several different types of theatres. the main

Theatres in Daghestan - . daghestanis are now creating for themselves new forms of national art – opera, ballet,

Theatres in Prešov - . the alexander duchnovič theater. 1945 - the ukrainian national theatre at the beginning it were

Festivals - . divali holi navaratri summary. divali. divali is the hindu new year and the festival of lights. the