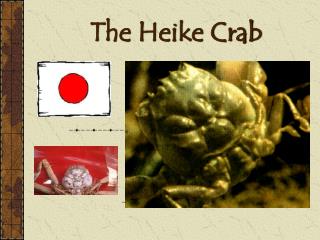 The Heike Crab. The Story:. How is the selection of the Heike Crab Different From The Selection of Sickle Cell Anemia? - . limulus polyphemus.

Cancer the Crab - . by: beth moncarz. mythology highlights. hera did not like hercules and wanted to kill him so she sent

crab - . the crab like walking sideways a nd l think the reason why, is to make himself look sneaky and pretend he’s a

“Save the Blue Crab” - . the body: blue crabs have a hard exoskeleton. an exoskeleton is like a shield on the outside

The Nutty Coconut Crab - . by: emily richards. what is the coconut

The Amazing Crab Spider! - . by: emilee, hunter, shane, drew, avery. it can be yellow and white. it has big black eyes

The Marine Hermit Crab - . introduction. during this lesson, you are going to investigate one creature that can be found

The Chinese Mitten Crab - . what is the mitten