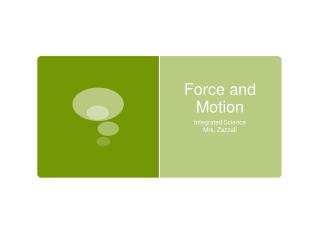 Force and Motion. Integrated Science Mrs. Zazzali. Lesson 1-Circuit of Inquiries . 1.1 The Hand Warmer , What is Friction? Friction - surface resistance to motion, as of a body sliding or rolling. . Inquiry 1.2 – Constructing and Interpreting a Graph. Inquiry 1.3 – Rolling Around.

Rotational Motion - . hope you learned polar coordinates. rotation. the motion of these objects cannot be easily

UNIFORM CIRCULAR MOTION - Uniform circular motion is motion in which there is no change in speed, only a change in

Forces - . history. archimedes was the first to write about forces. galileo envisioned a force as a push or a pull.

Chapter 2 - . linear kinematics describing objects in motion. define motion:. motion is a change in position over a