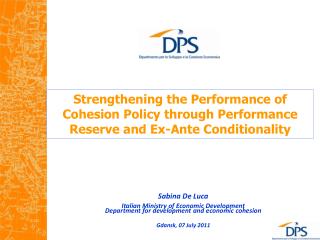 THE HYOGO FRAMEWORK FOR ACTION IN ITALY NATIONAL PLATFORM FOR DISASTER RISK REDUCTION AND - 1/28. the hyogo framework for

Creating Alternative Narratives of Social Exclusion : Schooling, E mployment and I dentity - Social exclusion and the

Hierarchy of the Catholic Church - . the bishops, of whom some bear the titles of patriarch and archbishop, are united

USE OF ECONOMIC INSTRUMENTS FOR PROMOTING SUSTAINABLE DEVELOPMENT - Ministry of finance of estonia. use of economic

Department of Statistics, Ministry of Economic Development of Georgia - Experience of the agricultural census 2004 in

SOCIAL ECONOMIC DEVELOPMENT OF THE REPUBLIC OF UZBEKISTAN - And the measures taken to improve the business environment.

A new indicator of well-being : The Italian case - Gdp remains undeniably important as a way to measure national