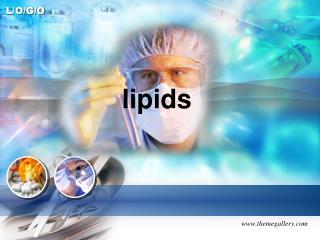 Lipids - . lipids. lipids are naturally occurring substances grouped together on the basis of a common property—they Lipids - . what are lipids?. class of biomolecules that are all water insoluble no defining characteristic except that

Lipids - . more types of lipids…. waxes: esters of saturated fatty acids and a long-chain alcohol; each with 14-30

Lipids - Fats, oils and waxes. lipids. lipid basics. lipids are made mostly from carbon and hydrogen they are hydrophobic

LIPIDS - . it is almost impossible to watch tv ads without some company talking about fats and dieting. we’re familiar

Lipids - . a lipid is any molecule that does not mix with water . they are “water fearing” / nonpolar ( hydrophobic )

Lipids - . lipids. lipids are a large and diverse group of naturally occurring organic compounds that share some general

LIPIDS - . an over view of normal and abnormal lipids. all are one. this not about the god there is only one disease –