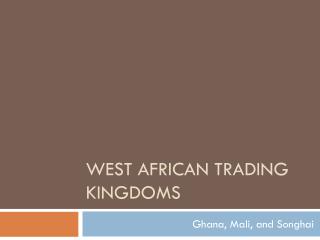 Practice Test - . world history ap #10. the existence of “africanity,” or widely shared customs across many parts of

Kingdoms of the Grasslands – West African Kingdoms of Ghana, Mali, and Songhai - . chapter 8 (2 of 4). need to know:

Germanic Kingdoms Unite Under Charlemagne - . ch. 13 sec. 1 pg. 317. the middle ages. there was a gradual decline of

The Five Kingdoms and the Binomial System of Nomenclature - . fred searcy biology. why study evolution?. understand