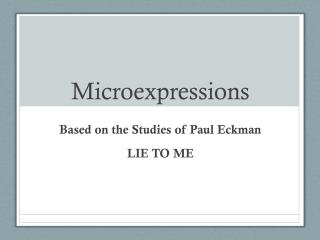 Microexpressions. Based on the Studies of Paul Eckman LIE TO ME. About Paul Eckman.

Microexpressions - . based on the studies of paul eckman lie to me. about paul

Organizational Communication - . i/o psychology in my life. exercise 11.1 think of a situation in which you and another

Ch. 5 Nonverbal Communication - . is anything that is not language a nonverbal form of communication? nonverbal= primary

Introduction to communication skills Adapted from a presentation by Hugh Palmer - University of hull. the process of

Dr. Paul A. Keddy - . the development and use of assembly rules in predictive community ecology . eva hillmann spring

Body Language Basics - . module one: getting started. the human body is the best picture of the human soul. ludwig

Why Relationships may Change or End - . by mr daniel hansson. models of relationship dissolution. lee’s sequences of