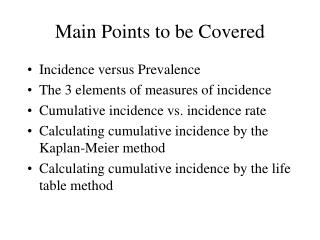 Main Points to be Covered

Main Points to be Covered

Main Points of the Talk - Racial and economic segregation in schools: barrier to quality and equality in education baris

Disease Association II and Measures of Attribution Main points to be covered - . measure of disease association in

SALIENT POINTS COVERED IN THIS PRESENTATION - . what is audit ? what is internal audit? its objectives different types of

What will be covered - Essential hr information on contracts and training from both the ecr and pi perspective session.

How to Use and Implement the Academic Advising Syllabus - . jill brown campus advising network western kentucky

Main points to be covered - . measures of association compare measures of disease occurrence between levels of a

Key Points!!! By Dr. Stepkowski!!! - . please note that the number of exclamation points is not indicative to how