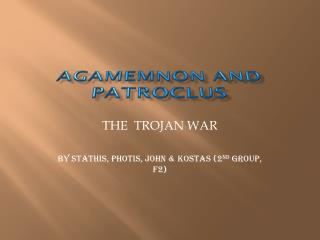 Agamemnon - . he came from mycenae. his wife’s name is clytemnaestra . he was the brother of menelaus and the son of

Agamemnon - . the house of atreus the story in the odyssey agamemnon. 1st generation names pelops hippodameia

Close Reading: Agamemnon - . the passage. “there is the sea and who will drain it dry? precious as silver,

The Return of Agamemnon - . orestes and his friend pylades find iphigenia still alive and serving the temple of artemis

Agamemnon By Tam Nguyen - . heroes. needed tale cleomedes did not have good morals cults believed the possessions could

Conceptions of Women in Euripides Alcestis and Aeschylus Agamemnon - Introduction. alcestis by euripidesagamemnon by

maggie and milly and molly and may - . jess and anna. to identify key literary features within the poem to understand the

Impulse and Momentum and Collisions and Stuff - . we will now quantify exactly how it hits the fan. momentum. momentum =