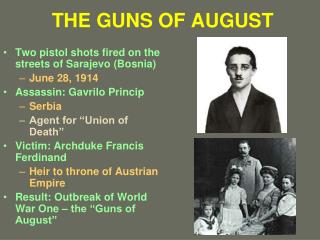 Section 2 – The Guns of August - . i. assassination in sarajevo. setting the

The evolution of guns - . by : decota higdon . there is a very big evolution . there are a lot of guns, the first gun was

Lecture Notes: The Stage is Set for the Guns of August - . by the early 1900’s , there were many efforts at fostering

Guns - . what would life be without them?. we would fight like barbians . the history of guns. 1232: the chinese invented

Guns - . adam tyk. world war one. the emergence of the first automatic rifles in 1911. used by the germans called the

GUNS - . public safety or public enemy?. purpose. analyze the pros and cons of guns and to determine their place in our