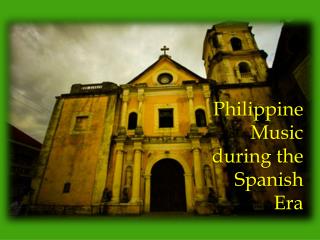 Philippine Music during the Spanish Era. In what ways and means did the Spanish missionaries taught the early Philippine society the Catholic faith?. The Liturgy was celebrated using . Gregorian Chant, . Polyphonic Masses and Motets. and Hymns,. all in Latin. SPANISH MUSIC - . male singers. in spain there are meny singers who have come so far,both as artists an as musicians,

Spanish Music - . irene lópez &amp; eva prieto. introduction. in spain the music is very important because it is a

SPANISH MUSIC - . male singers. in spain there are meny singers who have cme so far,both as artists an as musicians,

Spanish music - . la musica brani e compositori. introduction. the music of spain  has a long history and has played an

PHILIPPINE ART IN THE MODERN ERA - . modern art in the philippines. it has evolved into wide variety of expressions and

Elizabethan Era Music - . by clayton hoff. types of music played. simple songs and ballads were sung in the villages and

Music from the Vietnam ERA - . “the thing the sixties did was to show us the possibilities and the responsibility that