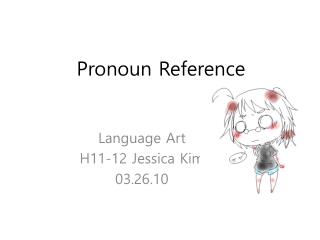 Pronoun Reference. Language Art H11-12 Jessica Kim 03.26.10. Clear Reference. A pronoun must refer clearly to only one antecedent. A pronoun should follow its antecedent closely enough to make the relationship between the two words clear. For example

Broad Pronoun Reference: Misuse of this , which , that and it - . from the uwf writing lab’s 101 grammar mini-lessons

Pronoun Reference - . i’ll position the target, and when i nod my head, shoot at it. ohhh, nooo!. contents. ambiguous

Pronoun-Antecedent Agreement - . what do you need to understand about pronoun-antecedent agreement errors?. what ’ s a

What is a pronoun? - Los pronombres subject pronouns in this presentation, we’re going to look at the form and use of

Pronoun-Antecedent Agreement - . what do you need to understand about pronoun-antecedent agreement errors?. what’s a

Pronoun/Antecedent Agreement - . a pronoun is a word used to stand for (or take the place of) a noun . an antecedent is a

Pronoun Reference: Use of who , whose , which , where , and that - From the uwf writing lab’s 101 grammar mini-lessons

Pronoun-Antecedent Agreement - . what do you need to understand about pronoun-antecedent agreement errors? • what’s a

Chapter 18: Pronoun Agreement, Reference, and Point of View - . pronouns are words that substitute for nouns (names of

Ambiguous and Vague Pronoun Reference - . what the heck are you talking about?. rule number: 30. it must be clear to the

Pronoun Flip Book - . pronoun. word used in place of a noun or other pronoun pronouns can be singular or plural. pronoun.

Faulty Pronouns or Ambiguous Pronoun References - . definitions. pronouns - words that take the place of a noun;