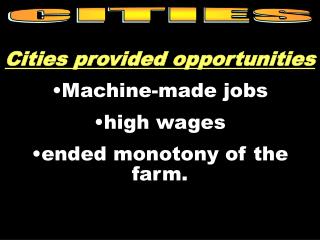 Cities - . a city is a big town. many people live in cities. they are crowded. the center of a city is called

Cities - . inr 456 political geography. how to define city?. 1 ) a place where the main economic activity is trade rather

World Cities and Other Big Cities - . alpha, beta, and gamma primate cities forward capitals. what can this map tell us?.

World Cities - . adapted from a presentation by david palmer &amp; phil kline. on your world map plot these cities to

World Cities - . how confident are you?. jan 2012. study figure 4, a photograph of a central urban area that has recently

Industrializing Cities - . manchester 1843: archetype industrial city. in 1801, london was the only city in the british