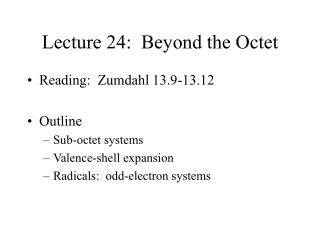 Lecture 24: Beyond the Octet Lecture 24: Beyond the Octet

The Octet Rule - . noble gases are unlike any other group of elements on the periodic table because of their extreme

The Octet Rule: Examples - . for ions we must adjust the number of electrons available, a: add one e - to a for each