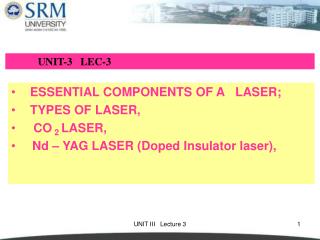 ESSENTIAL COMPONENTS OF A LASER; TYPES OF LASER, CO 2 LASER,

ESSENTIAL COMPONENTS OF A LASER; TYPES OF LASER, CO 2 LASER, All You Wanted to Know About Air-assisted Laser Cutting - If you work in the field of laser cutting metals, you might be

Gas Lasers - . this is what is inside. but how do they work ?. l.a.s.e.r. l ight a mplification by the s timulated e

Selective Laser Sintering - . by: ren merritt. what it is. selective laser sintering is a rapid prototyping technique

Ruby Laser - . crystal structure of sapphire: -al 2 o 3 (aluminum oxide). the shaded atoms make up a unit cell of the

Relaxation Curve of Gasses Heated by a CO 2 Laser - . by jonathan esten 15.03.2000 with phillip stewart under direction