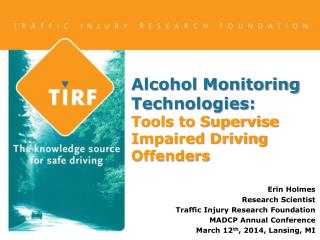 Impaired Driving - . what you should know. know the facts related to dwi crashes. know how alcohol affects you

Wasted in Wisconsin - . what teenage drivers should know about alcohol abuse and impaired driving. this supplement was

DRINKING AND DRIVING - . overview. what is… what is impaired driving? characteristics of youth and drunk driving

Impaired Driving - . (goal: arrive alive). with the privilege to drive, comes the responsibility to do so correctly .