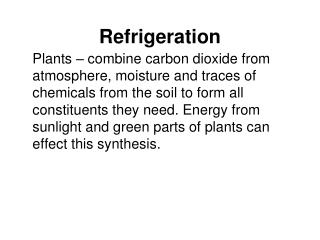 Refrigeration. Plants – combine carbon dioxide from atmosphere, moisture and traces of chemicals from the soil to form all constituents they need. Energy from sunlight and green parts of plants can effect this synthesis. HFC-free refrigeration technology for the retail - . (currently a technical revolution is taking place in the

REFRIGERATION FUNDAMENTALS - . hvac/r. soldering &amp; brazing. when and why; when an a/c or refrigeration system is

Cool Master Refrigeration - Cool master is on the list of best custom build refrigeration companies in canada. we have