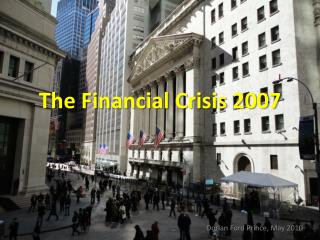 The Financial Crisis and the Future of the P/C Insurance Industry Focus on Surplus Lines - . napslo annual convention

Crisis Intervention Plan - . enable the individual to:. prevent a crisis self-manage a crisis alleviate a crisis end the

Financial Crime: What does it mean to Investec? - . mlros.com february 2007. financial crime:. what should we consider?