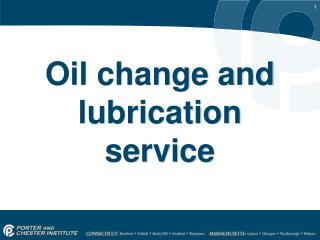 Oil change and lubrication service. Why does oil need to be changed..?. The oil in the engine is contaminated by combustion gases that leak past the piston rings and enter the area below the pistons [crankcase] These gas vapors are called ‘blow-by gas’. Blow-by gas.

Trabon Lubrication - Machines, are costly enough, this is the reason why the owners show much concern regarding maintain

Lubrication is the lifeblood of industry Protect your priceless assets … … AMP UP TODAY! - Amp advanced maintenance

OBJECTIVES - . after studying chapter 14, the reader will be able to: prepare for engine repair (a1) ase certification

Motor Lubrication - For more details visit us : http://www.fdjohnson.com/products/lubrication-products lubricants are

What is the US Forest Service Response to Climate Change? - Connecting the forest service climate change roadmap

The Basics of Lubricants and lubrication - . hussam adeni. lube.specialist@gmail.com. meaning of lubrication. friction -

Farval Lubrication - For more details visit us : http://www.fdjohnson.com/ farval lubrication is trying its best to come

Engine Cooling And Lubrication - . engine cooling. during combustion of fuel tremendous amount of heat is produced. .

Lubrication Of Plain Bearings - . plain bearings are the oldest types of bearings. l at first shafts and bushes were made