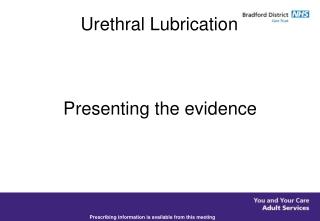 Urethral Lubrication. Presenting the evidence. Prescribing information is available from this meeting. Catheterisation gels. Why do we use them? Anaesthetic gel Antiseptic gel Discussion What do you use?. The benefits of using a catheterisation gel. Lubrication Facilitates insertion

Motor Lubrication - For more details visit us : http://www.fdjohnson.com/products/lubrication-products lubricants are

Farval Lubrication - For more details visit us : http://www.fdjohnson.com/ farval lubrication is trying its best to come

Lubrication of Chains - . the chain. is one of the eldest traction and drive components, consisting of individual links