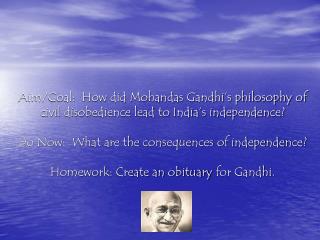 Aim/Goal: How did Mohandas Gandhi’s philosophy of civil disobedience lead to India’s independence? Do Now: What are the consequences of independence? Homework: Create an obituary for Gandhi. Born October 2, 1869 - died January 30 1948 Major political and spiritual leader of India ACCOMPLISHMENTS - Innovation. a highly-efficient, cr-activated, directly diode-pumped laser which is broadly tunable in

Accomplishments - Libraries for new medical schools: the creation of a network for identifying and supporting the needs