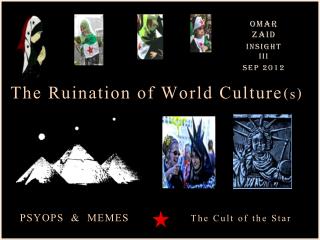 The Ruination of World Culture (s) PSYOPS & MEMES The Cult of the Star. Omar Zaid Insight III Sep 2012. A Silent Subjective Experiment Observe your reactions to the following 7 slides. Especially contrast slide 7 with the former 6 slides. 1. 2. 3. 4. 5. 6. 7. Omar Todd - Is passionate about animal welfare. in 2008, he began volunteering with sea shepherd global, a marine

An insight into shot put techniques - When it comes to track and field events, they are separated by two different sets