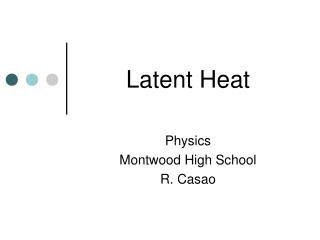 Thermal Reservoirs and Heat Engines - . a conceptual schematic of a heat engine.  two channels of heat transfer, with CRYOCAR - . what is a cryocar?. it is a liquid nitrogen powered vehicle. propulsion systems are cryogenic heat engines in

WHAT HAPPENS TO LATENT HEAT? - . sinks of insolation. 1. sensible heat flux . energy used in changing the temperature of