Obstacles for being In His presence - PowerPoint PPT Presentation 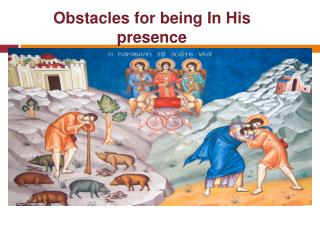 Obstacles for being In His presence Obstacles for being In His presence. Old presence Vs current presence.

Obstacles for being In His presence

Forgiving Others - . understanding why, when and how we are to forgive others. introduction. nothing more fundamental for

In His Presence Coptic Youth Conference - . scotland october 2013. overview of the theme. what do we mean by being in his

Overcoming Discouragement - . discouragement due to trials in life. deuteronomy 1:21 look, the lord your god has set the

DESTINATION HOLINESS - . “but as he who called you is holy, be holy yourselves in all your conduct: since it is written

Here Is Love - . here is love, vast as the ocean loving kindness as the flood when the prince of life, our ransom shed

Love in Action - . i wonder why it’s such a compliment to tell a woman she looks like a breath of spring, but not to

Hindrances To Prayer - . conditions of acceptable prayer. must be offered in faith - james 1:6-7 must be keeping god’s

Prayer - . practicing our faith conversation with god. what is prayer?. a form of worship in which we have a conversation

The Revolution Will Not Be Televised - . a spirituality of justice catholic education week 24 – 30 th july. outline of

Ezekiel 40-48 - . the millennial temple and worship. introduction to ezekiel chapters 40-48