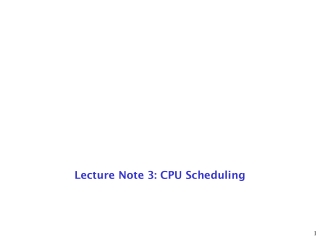 Preemptive Scheduling - . again in the context of cpu scheduling a thread or process is chosen to run it runs until

Scheduling Algorithms - . announcements. homework 1 is graded homework 2 is on cms prelim is in class on 14 th march.

CPU Scheduling - . chapter 5. cpu scheduling. scheduling the processor among all ready processes the goal is to achieve: