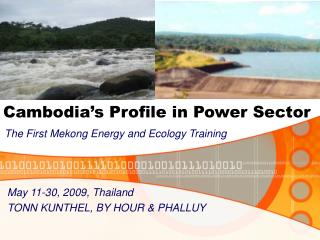 Cambodia’s Profile in Power Sector. The First Mekong Energy and Ecology Training. May 11-30, 2009, Thailand TONN KUNTHEL, BY HOUR & PHALLUY. General Information. Cambodia is situated in the Lower Mekong region, with an area of 181,035 square Kilometers Cambodia s Profile in Power Sector - General information. cambodia is situated in the lower mekong region, with an area

Power Sector Reforms in Delhi - . what we can learn from the experience so far. delhi vidyut board: - integrated utility

POVERTY IN CAMBODIA - 26% of the cambodian population live below the poverty line. the average daily income is less than

Indian Power Sector - . financing the growth . mission. power for all by 2012 national goal is to provide reliable,