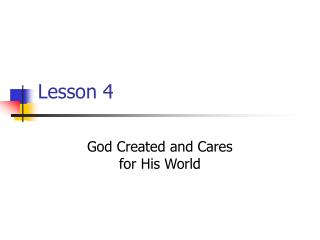 Lesson 4. God Created and Cares for His World. What is a Creed?. A statement telling what we believe or trust. The Three Main Christian Creeds. Apostles: Nicene: Athanasian:. Written to give a brief summary of main Bible teachings.

Logistics - . product lifecycle management. lesson overview in this lesson you will receive an overview of mysap product

Warm Up - Unit 2 lesson 1 . warm up. problem of the day. lesson presentation. lesson quizzes. warm up evaluate each