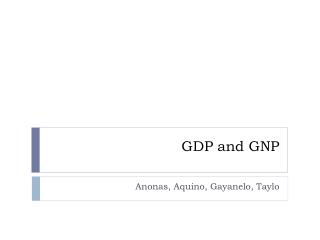 GDP and GNP. Anonas , Aquino, Gayanelo , Taylo. What is GDP?. Gross Domestic Product (GDP)’s technical definition is the total value of the production and consumption of all the goods and services of the country. How is GDP computed?. GDP can be solved using the formula: