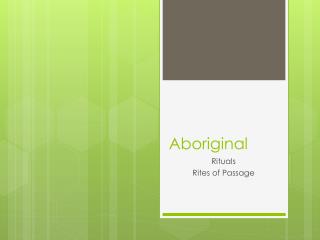 Aboriginal. Rituals Rites of Passage. Sacredness in Daily Life. Because Aboriginals believe that all of life is sacred, therefore, prayer is honouring the Creator’s gift. The purpose of prayer is to honour the Creator’s greatness.

The History Of Aboriginal Peoples In Canada - . vocabulary. #40 aboriginal people : they are the first people to live in

Prepared for the Congress of Aboriginal Peoples By Alexandre Clément and - Engagement with first nations, métis, and

Colonization and Capitalism in Canada - . january 21. overview:. from mercantilism to capitalism, via the process of

Aboriginal Art - . by nirvika. this is a slideshow showing the most popular aboriginal art most seen in caves and rocks

Forestry across management and knowledge systems - Aboriginal peoples and forest industries: many options for

How the Kangaroo got his tail Based on an Australian Aboriginal Legend - . presentation by: shelby mackay 4/20/2011 2 nd